At Residence Villa Paradiso we care about environment, animals but even more about you our lovely guests, speaking with you during the past seasons we know you love to walk and to discover our beautiful area this is the main reason why we are fully involved with local projects developing and maintaining a more sustainable tourism offer based on active holidays.

The territory of Alto Lake Como boasts many interesting ancient mule tracks that originally connected the lake to those towns in the hillside. Some of them have now fallen in disuse and are no longer viable, they are covered by vegetation and have been abandoned.

Given the situation VisitGravedona the local tourism association wanted to take care of the territory. They developed a solution, a project to restore and equip some signs of mule tracks, creating itineraries half half-height and easily identifiable.

It was chosen the route that starts from Via Pessina in Gravedona near the Church of Santa Maria delle Grazie to reach the trail through the ancient village Segna and then continue on to the ancient hamlet of Santa Croce di Naro .
From here the trail continues to the base of the Sasso Pelo, to reach an old lime kiln whose remains are still visible, and then continue on to the village of Livo, from which you can reach the Insubric line (or Insubric Fault), a geological site of considerable importance.

The enthusiasm of the success of the project was shared in 2013 with colleagues Promo Domaso and Visit Dongo, which became willing to create a shared desk to extend the network of paths of the hillside on their territories of competence .
During the spring of 2014 were placed the poles and tables directional with their travel times.

The collaboration among Gravedona, Domaso and Dongo continues with the study and subsequent implementation of a common tourist map with a single graphics to convey to you a territorial continuity between the various towns. On the front of each country has developed its own town with its commercial services, and the back has been developed a hiking map with an imprint technique (1: 15,000) intended precisely to hikers who want to walk the path network with signage.

We look forward welcoming you!! 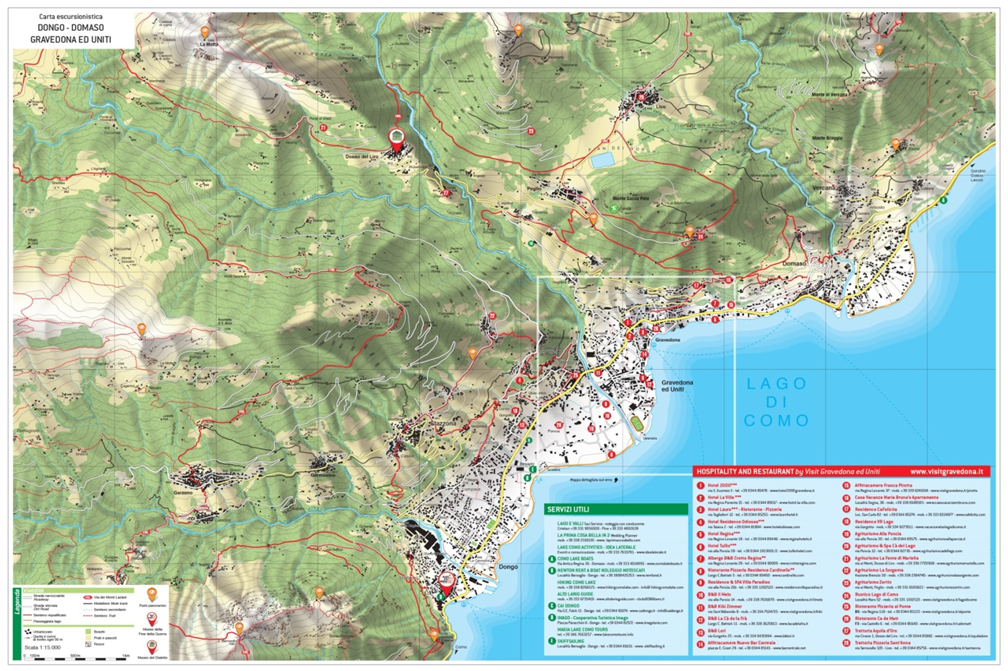